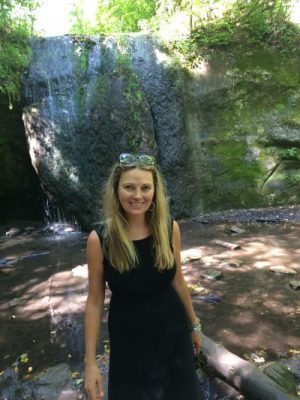 After receiving an M.A. from Stanford University and a J.D. from the University of Iowa, I taught law for ten years.  I’ve always loved history and when my husband and I welcomed our two sons into our family, I would tell them bedtime stories about American history, with the kids playing starring roles in mini-time travel adventures.

One day, we wandered into a local cemetery and spotted the grave of a soldier who’d served under George Washington. Thinking of the hardships of Valley Forge and the sacrifices of those early soldiers, I wondered if modern Americans still had the grit to fight the Revolutionary War.

To answer that question, I sent four kids back in time to Boston, 1775,  in ONE IF BY LAND, TWO IF BY SUBMARINE,  a YA/upper MG time-travel adventure set in the American Revolution.

My husband and sons were eager to take on the time-travel adventure, but I insisted they remain in the twenty-first century. For now,  our family lives in Wisconsin with our  Goldendoodle, Piper, but something that looks like a time machine is taking form in our basement, so stay tuned for book two.

Processing…
Success! You're on the list.
Whoops! There was an error and we couldn't process your subscription. Please reload the page and try again.
%d bloggers like this: